When You Are Called To Action – Moments Count

When You Are Called To Action – Moments Count

Remember always, your safety training can make the difference, which assures your co-worker goes home to his family.

Within our daily lives there will always be opportunities to help others. The value we place in the many individuals who represent the foundation of Latshaw, sometimes is best shown when the unexpected happens. It is in those precious moments, where deep parental instinct coupled with solid training can and have made a difference. Not too long ago, Travis Hickey our Maintenance Manager, both a valued leader and father of 4, was called to make that difference. The following story takes you to that day, where prompt action helped save the life of Aubree Allen during a family vacation at Lake Ft. Gibson in Oklahoma. That story is told from Travis’ vivid capture of events surrounding what began as he was preparing to grill for his family in the early evening hours after one of those hot Oklahoma summer days. To gain understanding of Travis’ core character, he exemplifies deep belief in parent responsibilities, treating people fairly and leading by example. It is also worth knowing, the details you are about to read were not in the flurry of media accounts from that day…..like many news events….the focus was on splash and not substance. For those 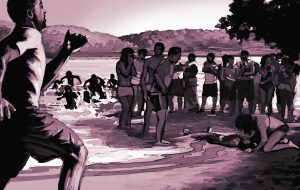 whose journey has awakened deeper understanding, they will see with clear vision, that God’s influence is all around us daily…and even more so in times of great struggle. “I was back up at the camp site, after swimming most of the day with my family. We had spent a wonderful day together. As I was preparing the evening meal, some movement at the swim beach caught my attention. It was running of kids away from the beach and from the water combined with adults running towards the water, which indicated trouble. First thing to cross my mind is possibly a couple of kids fighting but as I approached the swim beach I noticed a group of people surrounding what looked to be a little girl that had drown. I immediately started a mad dash for the girl as if she were my own! From that moment on, it was as if I was on autopilot, my focus was all about helping, the blur of a young man on the phone, flashed by as I asked him “you have 911 coming?” He said “yes sir”. I kept running, observing and trying to figure out my plan before I reach the little girl (what were the people down there already doing to her and how can I help?) and by the time I get to her I realize that nothing is being done except for a young woman holding the little girls head in her lap, the rest of the people down there were in shock and not sure what the next step should be. So…I made a path right through the middle of everyone, dropped down on top of the little girl, looked at the young lady (Ashley) at her head and said “I’m going to give her 30 compressions and then I need two breathes from you” and then I started. No need for me to even check pulse on the first round of compressions as the little girl was obviously lifeless, eyes rolled back, bluing lips. After that first round of compressions and two breathes, we had nothing! Ashley looked at me for what next to do……, I told her we repeat the same compressions and two breaths. I checked pulse before we 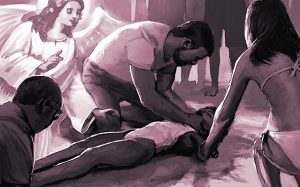 started this second round, nothing…., the first positive reaction was half way into the second round, her body reacted a little but still no pulse. Then we started the third round of CPR.

I will never forget that moment, 20 compressions into the third round, where she started spitting up water, food and blood and now we have breathing and a very strong pulse! Internally and externally I shouted…..She’s back! Ashley worked tirelessly to keep removing all of the contents which Aubree was expelling to clear her air passage. From that moment, we kept her on her side to help expel more water and fluids. It was then that her grandfather, (unknown to me until that moment), joined by patting her back hard to continue helping her empty both her lungs and stomach of ingested lake water. Yes, she was back among the living, coughing, deeply inhaling. It is important for all to know, from the moment before I parted the crowd, running towards a clearly lifeless child, it was as if a great calmness took over….extremely clear focus seemed to surround me. As I straddle Aubree, my feet and her’s, both in the water, her body barely on the beach, all I could see was her and Ashley holding her head in her lap….from that moment, until that 20th compression in the third round, all else around me was a blur. It was as if we were in some kind of protective bubble….After her grandfather and the crowd gathered came back into focus, discussion was heard on what next to do, whether to move her, or wait for the medics….I asked her grandfather what he wanted to do, and the decision was mutually made to move her, thinking we could cut the time to reach arriving ambulances by meeting them halfway. I carried her to her grandfather’s car, placing Aubree in the back seat, but insisting that someone must stay directly with her, should additional CPR be required…..within moments, seconds really, someone yelled out…..ambulances arriving…and I picked her back up and took her to the rear of her grandfathers lowered pickup truck tailgate. It was then, that arriving medics took over and my job was done.”

“Roughly twenty minutes later, when all the commotion had settled down, people returned to their respective campsites, it really hit me…..someone greater had guided me that day. For that many are grateful.”